Welcome to the Release Notes version 2.21, your guide to the latest enhancements to Smartico’s Marketing Automation and Gamification platform.

If you have any questions or require further information on the functionality of the written below, please do not hesitate to contact your account manager.

This document provides an overview of the services, bug fixes, new features and enhancements that Smartico from now on can support.

This document gives a technical explanation and overview including the overview of the new user interface, the functionality and the result.

The document does not describe in detail the functionality of an existing feature related to a new development brought to you by these release notes.

For reference, please use the Smartico Knowledge-base section at: https://smartico.ai/docs

Many operators run a multinational operation where users from all over the world play with different currencies, which has to be supported across the entire Marketing approach and be optimized for each user and his own coin value.

Multi-Currency support in Smartico.ai has been extended and can now be used in various sections of our platform including Missions, Journeys etc.

Using this feature allows the operator to be very precise with offering to a player, while still maintaining good usability.

When choosing a property that is defined as “monetary” a multi-currency dropdown will appear where the operator will have to choose the amount they want to target in each separate currency. Default value will be used in case one of the currencies will be left empty.

These amounts can be populated to each user based on his own currency and the configuration done by the operator.

From now on you can have the users list sent to your email account simply open the desired segment and click “Export Segment” on the top right corner of the screen.

You will then be prompted with the message confirming the export will be sent to your email registered with the account in a form of a link to a CSV download, and to allow push notifications on your browser to be notified once the export is done, and be able to download the CSV directly from the Push message.

Your browser will then ask you to confirm the Push approval; 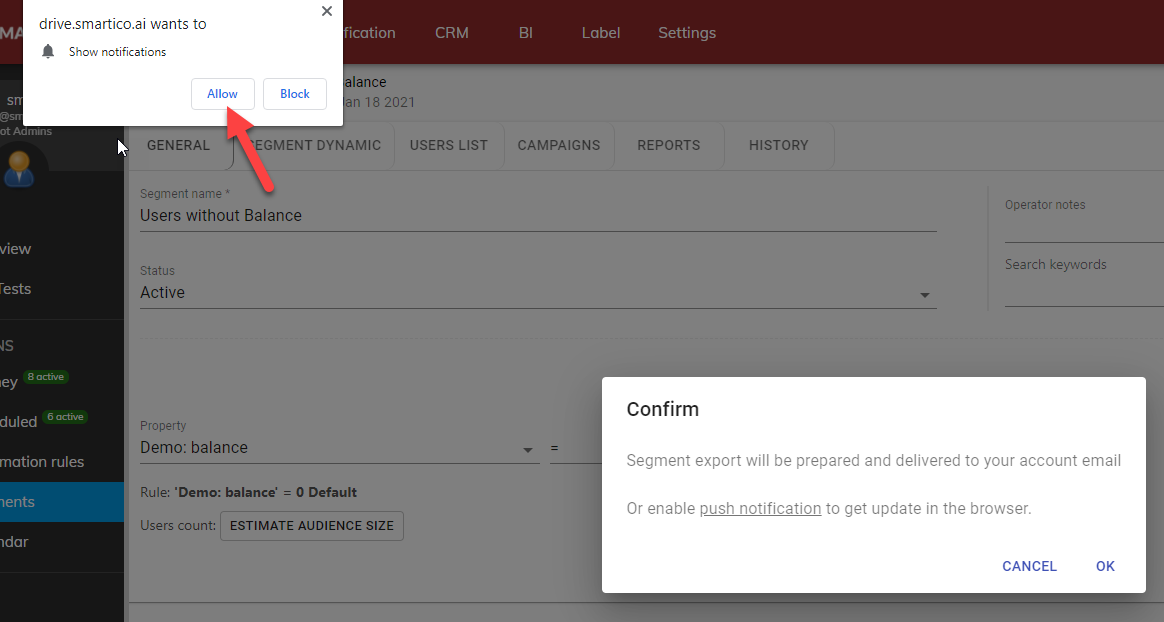 Once the export is done you will receive a Push notifications with a link to download the file; 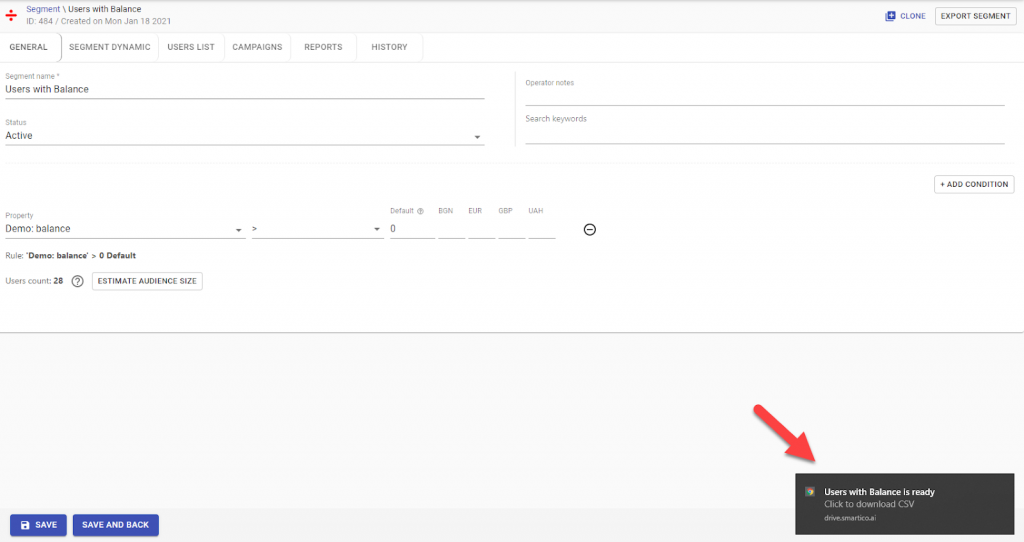 The file will contain all users captured within the exported segment and will include both internal and external IDs. It will also specify the brand ID each one of these users is registered on.

Flow Builder: Activity change in middle of a flow

Until now if you wanted to change the order in the flow, you would have to archive that part in the flow and rewrite it.
You can now change and replace the order of activities in the flow builder canvas without having to prepare them from scratch.

For example in the case below you would like to change the SMS to be sent after the matching of the user profile check. 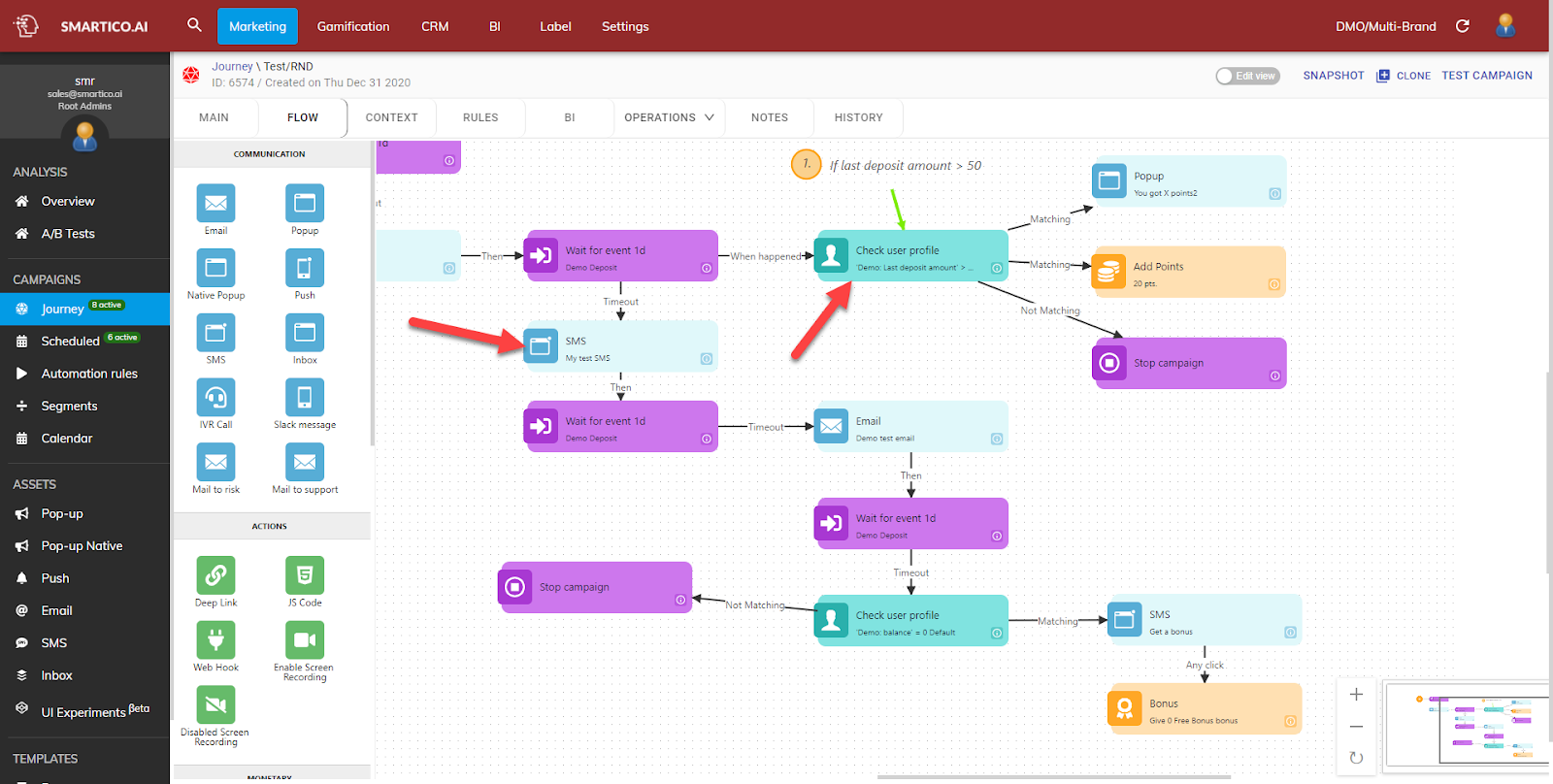 Instead of archiving the part of the flow followed by the event of “Wait for Deposit”, you can draw a new line between the “Check User Profile”  and the SMS activity.

You will then be asked if you are sure you want to change the flow, explaining the consequences of the change; 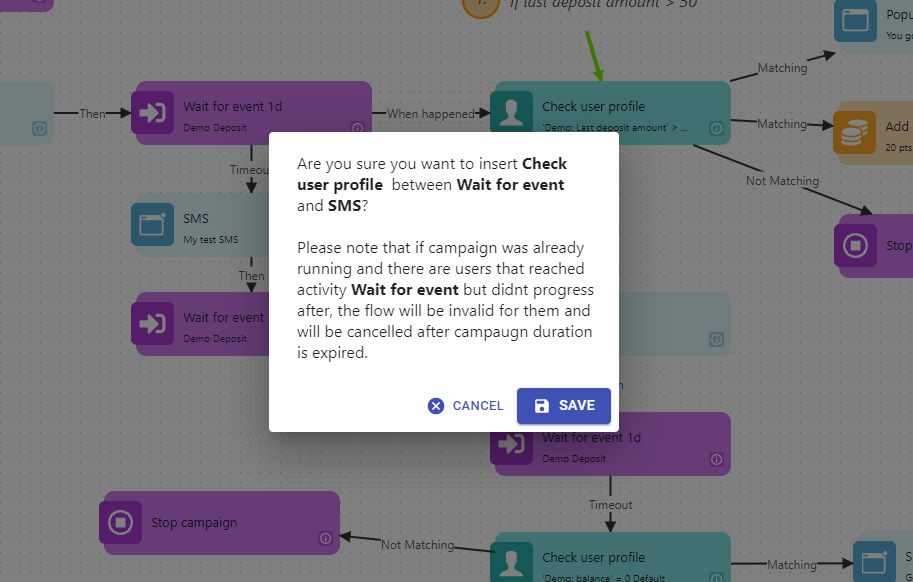 And by clicking the Save button, the flow will finally change;

From now on it is possible to track the revenue coming from a specific campaign or from any separate resource (Email, SMS, Popup, Push notification), based on the action users took after the delivery of the resource.

To track the money value of a campaign, the campaign must have a conversion rule based on a “Deposit Approved” event as described below (or other monetary event like “Purchase completed”, “Added to Shopping Cart” etc, Please consult with your Account Manager regarding specific events and properties that are used for the monetary actions).

Or by a Global Conversion Rule:

Now that the campaign will keep track of the revenue generated, you can see the amounts growing in a new column introduced in the main view of Campaigns and Resources.

We have developed a complex mechanism to ensure the weight of metrics is distributed according to importance and priority, multiplied by the Time to Conversion from the resource to deposit. See 2 cases below as examples:

Negative impact (Clicked OptOut) and undelivered Emails, SMS and other resources that will be involved in a converted campaign, which were naturally “missed” by the user, will be considered under “Indirect”.

Users that made a deposit and converted the campaign, but did not receive any communication during the campaign due to delivery failure, opt out etc, will still be counted in the campaign revenue and the source of impact would be “Indirect”.

When a user is engaged in more than one active campaigns, the Revenue will be distributed by our algorithm between those campaigns based on the “Time to Conversion” from the resources and will be calculated according to the impact of each resource in each campaign to achieve optimal result and as close to real distribution of the revenue generated.

You can  deep dive in the different perspective of revenue contribution in the BI cube “Marketing: Addition Value analysis”

As part of the flexible and sophisticated affiliate deal mechanism, we introduced the option to have CPA tiers based on any criteria.

To create a CPA tier you will need to “Enable CPA tiers” and choose the CPA amount for each count of qFTD as described below:

You can also create a sub-deal to define deeper rules of tiers for a specific parameter within the deal you have created. For example in the deal above a user from Germany, in any brand will trigger a CPA of €200 if he is the 20th qualified depositor for the deal.

By making a deeper configuration you can decide the following:

A user from Germany, and only from the brand “Slot Casino” will trigger the following CPA:

To see more information on how to create an affiliate deal, please refer to article on the subject in the Knowledge-base section here, or contact your Account Manager.

Want to find out how our Multi-Brand Solution can save your CRM Manager and Marketing team time and money? Contact one of our experts for a free demo.

We use cookies on our website to give you the most relevant experience by remembering your preferences and repeat visits. By clicking “Accept All”, you consent to the use of ALL the cookies. However, you may visit "Cookie Settings" to provide a controlled consent.
Cookie SettingsAccept All
Manage consent

This website uses cookies to improve your experience while you navigate through the website. Out of these, the cookies that are categorized as necessary are stored on your browser as they are essential for the working of basic functionalities of the website. We also use third-party cookies that help us analyze and understand how you use this website. These cookies will be stored in your browser only with your consent. You also have the option to opt-out of these cookies. But opting out of some of these cookies may affect your browsing experience.
Necessary Always Enabled
Necessary cookies are absolutely essential for the website to function properly. These cookies ensure basic functionalities and security features of the website, anonymously.
Functional
Functional cookies help to perform certain functionalities like sharing the content of the website on social media platforms, collect feedbacks, and other third-party features.
Performance
Performance cookies are used to understand and analyze the key performance indexes of the website which helps in delivering a better user experience for the visitors.
Analytics
Analytical cookies are used to understand how visitors interact with the website. These cookies help provide information on metrics the number of visitors, bounce rate, traffic source, etc.
Advertisement
Advertisement cookies are used to provide visitors with relevant ads and marketing campaigns. These cookies track visitors across websites and collect information to provide customized ads.
Others
Other uncategorized cookies are those that are being analyzed and have not been classified into a category as yet.
SAVE & ACCEPT 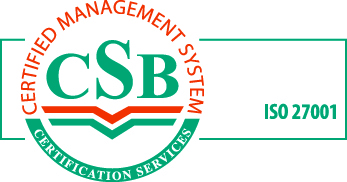